Some of John's Editorials include:

Will September 11 Make A Difference in Media Violence?

Who Will Speak in the Public Interest?
by the Rev. John Jackman
Media deregulation threatens free exchange of information
Winston-Salem Journal, March 9, 2002

Talk Back To TV!
by the Rev. John Jackman
The Moravian Magazine, October, 1999 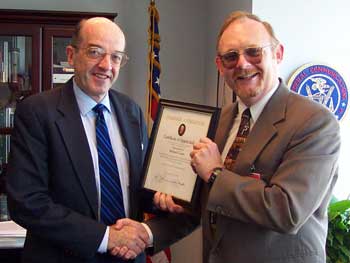 John Jackman presents an award from Comenius Foundation to FCC Commissioner Michael Copps for his valiant work in preserving diversity of media ownership.